A Christmas Story or Junked Cars Can Be Beautiful 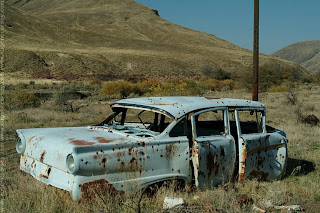 Hitchhiking on Christmas Day from Montana to Idaho.

I hitchhiked from Bozeman to Big Sky [Montana] yesterday afternoon. When I got to Big Sky it was 4:30 P.M. I walked south a few miles and soon it was nightfall.

I walked past this restaurant/bar and saw this junked car to my right. I walked up the slope to the car and it was covered with snow. I crawled inside the back and rearranged some things that were stored in it so that I could make room for me and my sleeping bag. Well, somebody who worked at the restaurant/bar saw me and told me to get out of the car; he said that I would freeze to death--it was too cold. So I rearranged what I had rearranged in the back seat of the car, hefted up my backpack onto my shoulders and made my way south down the moonlit highway towards West Yellowstone. I was complaining a little bit: I didn't know why I had to hitchhike at night in the dead of winter in a snow-covered canyon. I knew that I was there for a reason, so I wasn't worried or all bent out of shape about the whole situation: I knew that the Lord would not leave me stranded forty miles from nowhere when it was that cold.

Eventually, I did get a ride with a guy who was going all the way to Idaho Falls. He was driving a pickup and had his two dogs sitting in the cab with him. I was very grateful that he picked me up. The road was pretty icy going towards West Yellowstone. We got to West around 8 P.M. It was 10 degrees F. We stopped at a gas station and I kicked him down five bucks for gas and I got a hot chocolate and corn chips for the road. We continued south and the roads were still snowy and icy till we got south of Last Chance/Island Park.

As we drove through Island Park, he told me that some local Nazis burned down his log cabin (he used to live in Island Park) because he didn't subscribe to their philosophy. So now he lived up in the Bridger Bowl area north of Bozeman; he built log cabins for a living. In my experience, there are areas in Idaho that have a lot of Nazi/white supremacist/anti-government types. I don't like big government, but the Lord gave us human government for a reason. There are good people and bad people in government. I definitely don't like the Nazi/white supremacist mentality. Nazism is satanic.

This guy dropped me off at the Sugar City exit and I found a camper near a construction site to sleep in. There were two or three blankets in the camper, so I was able to stay warm last night. My sleeping bag is good to around freezing, that is why when it is cold I am always looking for a haystack or a cornstalk stack or a vehicle or a building to sleep in--added protection from the bitter weather.

[Originally published by Digihitch.com]
Posted by Tim Shey at 1:30 PM

Email ThisBlogThis!Share to TwitterShare to FacebookShare to Pinterest
Labels: Christmas Day, Idaho, Junked cars, Montana, No room at the inn