A Wall of Fire - Divine Protection 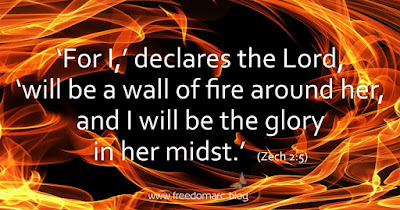 This is from What Saith the Scripture?:
The current fighting in Central Africa is a regional war which now involves eight African countries. Last summer it spilled over into Congo where American Baptist Missionaries have remained. The genocide and senseless killings in some areas have occurred so often that many in the Western world have become immune to the tragedy in this part of Africa. But God's people have been praying and He responds in sometimes miraculous ways. The following story did not make the evening news.
Tutsi soldiers had broken down the door of a young pastor's house and stood poised to slaughter by machine gun fire, him and his entire family right where they sat. Their intent was to massacre the civilians in this Hutu village. "Wait! the young man implored, would you not allow my family and I a moment to pray before we die? I can almost picture the sneers on the face of these soldiers as they watched this family, an African couple and their young children soberly kneel, arm in arm, in a circle on the floor and pray to God for mercy. The remarkable thing is that the expected shots never came. After praying, the family slowly stood up and saw that the soldiers were gone, not only out of their house but away from their village as well. It was not until several months later they found out just what had happened.
At a church meeting in another town where Christians from both sides had gathered to pray, this young pastor told his story and the seemingly miraculous way in which the soldiers "just disappeared from his house and village."
"I think I can explain," came a quiet voice from the back of the room... spoken by one of the Tutsi soldiers who had been there that fateful day. "You see," said the soldier, "I was there when we broke into your house. I was one who had your children lined up in my rifle site as you kneeled and prayed... when suddenly a wall of fire, fierce and ferocious, jumped up and surrounded the lot of you. We couldn't even see beyond the flames. Due to the intense heat and fire, we knew the house would burn down so we fled. When we went outside and saw your home consumed by fire and yet not destroyed, we fled the village as well. Later I realized that this was not the type of fire we are familiar with but a fire sent by God. If this is how your God responds, I want to know Him too! I am tired of the fighting and the killing... this is why I came tonight."
Miracles abound in war torn Central Africa. Prayer is, and will always be, the only response to the tragedies and crises in our lives.
.
A mighty fortress is our God...
"For I, saith the LORD, will be unto her a Wall Of Fire round about, and will be the Glory in the midst of her" (Zechariah 2:5).

The Fire of the Lord
Samuel Kaboo Morris
God's Protection in Battle
Prophetic Vision of Joseph Ayo Babalola
No Weapon Formed Against Thee Shall Prosper
Posted by Tim Shey at 10:19 AM