Are you a Disciple? 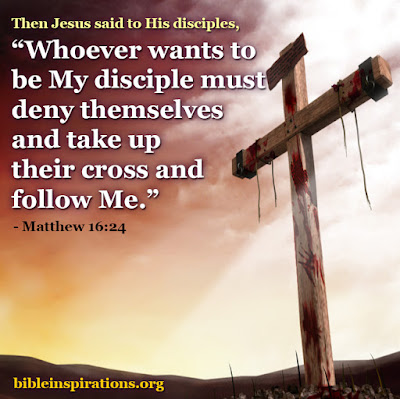 This is from the blog My Dreams and Visions:
I had this dream 3 years ago but today the Lord dropped something new into my spirit that I feel led to add here as I republish the previous posting.
I had a dream the morning of 09/26/2013 . In the dream I was inside a church although not a part of the church, I was just inside observing. I saw 2 sets of pews that were full  of people on both sides with an aisle separating the pews.  Then I saw, towards the front of the church, a large cross and it was laying with the top corner of the cross and foot of the cross  positioned in such a way as for someone to stoop down and get underneath the cross and carry it.  The cross was positioned with the foot of the cross towards the pulpit and the top was facing the doors of the church. It was as if it were placed there for anyone willing to stoop down and pick it up. What I found significant is the fact that in every church I have ever been in, the cross was always standing, usually on the platform where the preacher preaches his sermon but here it was not, instead, it was among the people The people in either side of the pews paid no attention to it as they were engaged in worship getting their Holy Spirit buzz. Then I saw a young man get out of the pew, walk towards the cross,stoop down, pick it up, and then proceed to walk out of the church.  I remember people laughing at him as he did this. Sound familiar?  The young man was undeterred and carried the cross, now his cross out of the church.
What the Lord dropped into my spirit is that only the young man in my dream was His disciple. Those who stood worshiping and then who were  subsequently  laughing at the young man carrying his cross were not.
Whoever doesn’t take up his cross and follow me doesn’t deserve to be my disciple. (Mat 10:38)
Posted by Tim Shey at 9:26 AM

Email ThisBlogThis!Share to TwitterShare to FacebookShare to Pinterest
Labels: Denial of Self, Disciple of Christ, My Dreams and Visions, the Cross