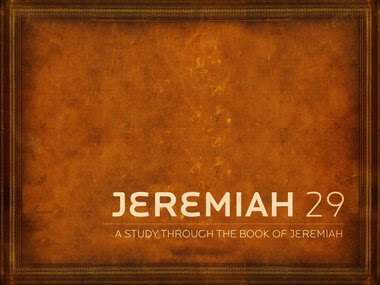 This is from the blog Kevin Lotz:

"Thus shalt thou also speak to Shemaiah the Nehelamite, saying,  Thus speaketh the LORD of hosts, the God of Israel, saying, Because thou hast sent letters in thy name unto all the people that are at Jerusalem, and to Zephaniah the son of Maaseiah the priest, and to all the priests, saying,   The LORD hath made thee priest in the stead of Jehoiada the priest, that ye should be officers in the house of the LORD, for every man that is mad, and maketh himself a prophet, that thou shouldest put him in prison, and in the stocks.   Now therefore why hast thou not reproved Jeremiah of Anathoth, which maketh himself a prophet to you?   For therefore he sent unto us in Babylon, saying, This captivity is long: build ye houses, and dwell in them; and plant gardens, and eat the fruit of them.   And Zephaniah the priest read this letter in the ears of Jeremiah the prophet.
"Then came the word of the LORD unto Jeremiah, saying,   Send to all them of the captivity, saying, Thus saith the LORDconcerning Shemaiah the Nehelamite; Because that Shemaiah hath prophesied unto you, and I sent him not, and he caused you to trust in a lie:   Therefore thus saith the LORD; Behold, I will punish Shemaiah the Nehelamite, and his seed: he shall not have a man to dwell among this people; neither shall he behold the good that I will do for my people, saith the LORD; because he hath taught rebellion against the LORD."

In the previous post, we saw the Lord deal with two exiled false prophets in Babylon.  The Lord’s charges against them were adultery and prophesying lies to the exiles.  Because the false prophets also committed rebellion against Nebuchadnezzar and Babylon, Nebuchadnezzar had them burned alive.
In today’s passage, we catch a glimpse of the ongoing correspondence between Jerusalem and Babylon.  Jeremiah’s letter has reached Babylon, and Shemaiah, one of the exiled prophets in Babylon has responded.
Shemaiah wrote to three groups in response to Jeremiah’s message:
Shemaiah calls out Zephaniah the priest for not dealing with Jeremiah.  Zephaniah was the priest in charge of the Temple in Jerusalem; he had the authority to address all issues, including disciplinary actions against priests and prophets.
Shemaiah calls Jeremiah a “maniac”, a madman if you will, and a false prophet.  And what are the basis of Shemaiah’s charges?  Jeremiah’s claim that it would be a long time (seventy years) before the exiles would be released to return to Jerusalem (vs. the two years all the false prophets were saying).  And what was Shemaiah’s recommendation for Jeremiah’s punishment?  Public humiliation again via stocks and neck irons.
What was Zephaniah’s response?  Instead of carrying out Shemaiah’s demands, Zephaniah the priest took Shemaiah’s letter and read it to Jeremiah.  Why did Zephaniah the priest not implement Shemaiah’s demands?   Was he sympathetic to Jeremiah and wanted to obey the Lord?   Or did Zephaniah remember what happened to the last priest who put Jeremiah in stocks (see 20:1-6) and showed Jeremiah the letter just to save himself?   Scripture does not say.
Notice that in verses 30 – 32 that Jeremiah does not respond, but rather waits for a word from the Lord.  When the Lord answers, He tells Jeremiah to address the letter to the exiles in Babylon.  The Lord’s message?  Shemaiah was preaching rebellion against the Lord.   The Lord’s judgment on Shemaiah?  The same fate as Hananiah (see 28:15-17) – the death sentence for false prophets (see Deuteronomy 18:20-22).
As we close out Chapter 29, we also come to the end of this group of events in Jeremiah’s history.  Let’s take a quick look back on the events of the last few chapters of Jeremiah’s life:
And if we could ask Jeremiah why he did all these things, he would likely let out a deep breath and say with quiet but firm conviction, “I am doing what the Lord told me to do.”
May we, like Jeremiah, have the courage to follow the Lord’s leadings, to be faithful to the Scriptures and God’s prompting, no matter what the cost.
May we, like Jeremiah, wait on the Lord for our response, even when the attacks are personal and unfounded, or the majority of public opinion has turned against us.
May we, like Jeremiah, be more concerned about giving God glory and speaking the truth in love than worrying about our reputations.
May we, like Jeremiah, put our confidence in the Lord and leave the results of our obedience in His hands, and not try to control the outcome of events in our lives.
Blessings,
~kevin
Posted by Tim Shey at 8:14 PM