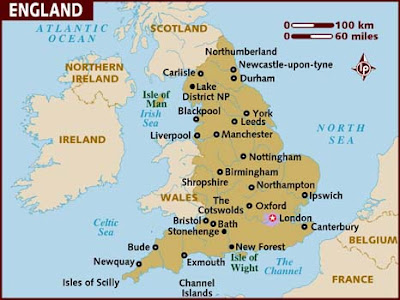 I saw in a vision 05/23/2014, the country of England rise up, but not completely out of the water, it seemed to be more prominent than it had before.  I saw a crown above the country sort of like the one pictured below, but instead this one was covered with what looked like diamonds and light seemed to be radiating from the crown as it hovered over the country and giving that same light to the country. (Tony Puccio)


This is a comment I left on Richard's Watch:
I just reread Tony’s dream above and I believe a key word in that dream is “diamonds”. This reminds me of that scripture “Now if any man build upon this foundation gold, silver, precious stones . . .” (I Corinthians 3: 12) A diamond is a precious stone, it is very hard. If light is shining through the diamonds, it would be, I believe, a very powerful light. It would be the exact opposite of light shining through, say, glass or plastic.
Glass is made out of sand. If we abide in Christ, we build our lives on the Rock of revelation knowledge, not on the sand or glass or plastic of the knowledge of good and evil (the world system or worldly Christianity). A diamond is considered a rock. “. . . for they drank of that spiritual Rock that followed them: and that Rock was Christ.” (I Corinthians 10: 4)
I used to work for a construction company back in Ames, Iowa years ago. We did a lot of concrete, steel and demolition work. There were a few times when I had to cut into concrete with a saw that had a diamond-tipped blade. It cut through the concrete very well. The Christian leadership that will arise through England in the coming years will cut through the world system like a diamond-tipped blade through concrete.
From Shakespeare’s Richard II, lines spoken by John of Gaunt:
“This royal throne of kings, this sceptred isle,
This earth of majesty, this seat of Mars,
This other Eden, demi-paradise,
This fortress built by nature for herself
Against infection and the hand of war,
This happy breed of men, this little world,
This precious stone set in the silver sea,
Which serves it in the office of a wall,
Or as a moat defensive to a house
Against the envy of less happier lands;
This blessed plot, this earth, this realm, this England,
this nurse, this teeming womb of royal kings,
Feared be their breed and famous by their birth,
Renowned for their deeds as far from home
For Christian service and true chivalry
As is the sepulchre, in stubborn Jewry,
Of the world's ransom, blessed Mary's son;
This land of such dear souls, this dear dear land,
Dear for her reputation through the world . . ."