Veronika West: A Vision of Britain and the United States 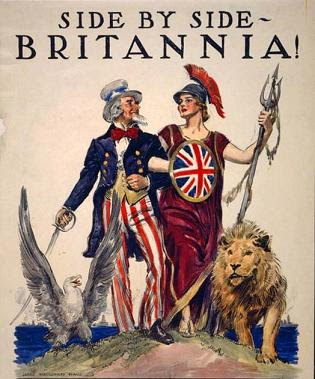 This is from the blog Richard's Watch:
Posted 26 Jan on UK Prophetic Words:
TODAY I HAVE BEEN LED TO PRAY FOR PRESIDENT DONALD TRUMP AND PRIME MINISTER THERESA MAY AS THEY PLAN TO MEET TOGETHER TOMORROW. WATCH! GOD IS DOING NEW THING IN THIS HOUR!!
Some of you will remember this powerful Word God gave me last Year July concerning the United Kingdom and the United States of America coming together in great purpose in the future. I believe we are now beginning to see the fulfilment of this Word…!
5th July 2016.
A WORD FOR AMERICA AND THE UNITED KINGDOM; THE TWO SHALL BECOME ONE!
“A MIGHTY RIVER OF GOLD AND SILVER; THE POWER OF GLORY AND REDEMPTION IS SHIFTING AND RESHAPING THE NATIONS IN THIS HOUR “!
Today while praying for the Nations, suddenly a very powerful vision opened up before me where I saw a large gold hand coming out of the Nation of America, I watched closely as the gold hand reached up high into the heavens.
Then suddenly I saw a large silver hand coming out of the United Kingdom and it too reached up high into the heavens, I watched intently as the silver hand of the United Kingdom and the gold hand of America came together and began to shake hands and as the two hands shook, I felt the earth tremble and the ground beneath my feet began to move and shift.
Then suddenly out of heavens came a third large hand, but it was a hand of blazing fire, I watched as the hand of fire came to rest upon the shaking hands of silver and gold, Suddenly the blazing hand of fire intensified in heat causing the hand of silver and the hand of gold to melt, I watched closely as the two precious metals melted into one another forming one mighty river of molten gold and silver.
And then I heard these words, “UNITY AND FREEDOM, GLORY AND REDEMPTION”
Then I watched as the river moved with great force and in great power, I watched as the river of gold and silver suddenly turned and broke forth upon the Nations of the earth and wherever the river of gold and silver flowed the mighty waters rose causing the landscape to be changed and transformed, then I watched closely as great fires broke out upon these Nations, the blazing fires of purification and revival, fires that will not be quenched but will only burn brighter and brighter.
Then suddenly out of the heavens I heard these words, “WATCH! FOR THE NATION OF AMERICA AND THE UNITED KINGDOM SHALL SHAKE HANDS AND THE TWO SHALL FORM A STRONG ALLIANCE AND THE TWO SHALL BECOME ONE IN PURPOSE, ONE IN VISION AND ONE IN GREAT VICTORY.
WATCH! FOR THE RIVER OF MY GLORY AND REDEMPTION SHALL NOW FLOW FORTH UPON THE NATIONS CAUSING A TIDAL WAVE OF TRANSFORMATION AND CHANGE, FOR EVEN IN THIS HOUR BELOVED THE POWER OF MY GLORY AND REDEMPTION IS SHIFTING AND RESHAPING THE LANDSCAPE OF THESE GREAT NATIONS AND THE FIRES OF PURIFICATION AND REVIVAL SHALL BURN, BURN, BURN”, says God.
Veronika West 26 Jan ’17