The Liberty of Obedience 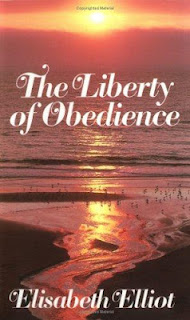 "There has often been a tendency to think of service to God as necessarily entailing physical hardship and sacrifice.  Although this is not really a Scriptural idea, it has gained wide acceptance.  It is easy to recall the saints who climbed the steep ascent of heaven through peril, toil, and pain, but the Bible also makes mention of Dorcas whose service to God was the making of coats.  (And who can tell what pain she knew that is not recorded?  It is God who keeps tears in His bottle.)

"When I lived with the Auca settlement, there were some who, from a long distance and with little idea of the actual situation, commended me for my 'wonderful work,' probably because they thought of it as difficult, isolated, dangerous, or even sacrificial.  There were others who for the very same reason condemned me, for I had taken a three-year-old child into that setting.  Some envied me, some pitied me.  Some admired, some criticized.  I could not help asking myself if perhaps I had been mistaken.  Was I really obeying God, or had I merely obeyed some misguided impulse, some lust for distinction, some masochistic urge to bury myself in the forsaken place?  There was no way of being sure what was in the murky reaches of my subconscious, but I was sure I had committed myself to God for His service, and I knew no other motivation.  The opinions of others--whether they commended or condemned--could not alter my duty, but their very diversity caused me to ponder carefully what that duty was.

"And then, by contrast, I watched the Indians, doing things they understood, untroubled by questions of 'service' to God or fellow-men (although they had served me in countless way--and I thought of the King saying to them, 'Inasmuch as ye have done it unto one of the least of these . . .ye have done it unto me,' and of how surprised they would be when they knew), free of the pressures of competition and comparison.  There was for me here a lesson in simplicity and acceptance of one's place in life, which I, because I was a Christian, could take from the hand of God.

"My duty was on thing, theirs another.  My responsibility lay here, but the responsibility of some of my correspondents who gazed starry-eyed at my role lay perhaps in an office or a kitchen or the cockpit of an airplane.  Who was to say which deserved to sit on God's right hand?"
Posted by Tim Shey at 1:31 PM

Email ThisBlogThis!Share to TwitterShare to FacebookShare to Pinterest
Labels: Elizabeth Elliot, Obedience, The Liberty of Obedience