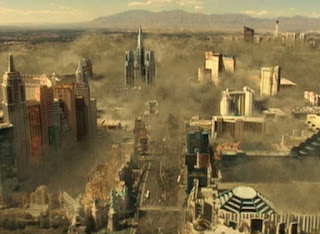 "Omg!! I had a vision about Las Vegas EXACTLY like yours, except I was awake! I live in Vegas. Have my hole life. I was at a bus stop on Charleston and Pecos around 10 or 11pm. Wile I was standing there waiting for the bus, I noticed everything around me seamed to be fake. Like it wasn’t really there. I mean nothing looked different, but it just felt out of place. That’s when the night became day, (I think it was day), and I saw/herd the chaos unfold. It was horrible! Buildings falling, cars crashing, people screaming, and dying. I remember seeing the sky glowing red from fires that broke out, and all the smoke in the air. I was seeing/hearing all this, but no one could see me see. The thing I remember the most was the screaming! It felt like it went on for ever! I just wanted it to stop! When it was over. Only like a minute or 2 had passed by. I stood there in shock for awhile trying to compared what had just happened. When the bus came, I kept thinking about it, and the more it sunk in. When I got off the bus, I called my mother telling her what happened wile trying not to freak out to much, but when I told her about the death I saw and the horrible screaming of people. I broke down crying. completely confused on why I saw what I saw. My mother said she seen the same thing in a dream awhile ago, and that God was trying to prepare me for what was coming. I asked her why didn’t he show me in a dream? She said maybe you would have thought of it as just that, a dream. So I said next time God needs to show me something so horrific, he can so in my sleep. In a way that I know is no ordinary dream. That was my 1st vision. I now have had 5 total. 2 wile wide awake, and 3 wile I was asleep. My 1st one happened when I was 20. I’m 25 now."

Las Vegas Earthquake
The Killer Angels
Posted by Tim Shey at 10:36 AM