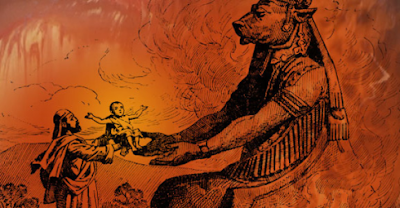 This is from the blog MARKIVEY.ORG:
Jezebel had instituted Baal worship as the State religion in Israel. Baal was considered the God of weather and fertility and it was believed that the hot summers and lack of rain meant Baal was displeased and needed to be resurrected from the underworld to provide rain. Baal could be appeased in three ways: Unrestrained sexual immorality, child sacrifice and pantheism or the worship of creation over the creator where the environment is more important than people.
One of the consequences of this activity was unexpected pregnancies but that’s not a problem for Baal as he will accept any child as a sacrifice. The arms and lap of Baal were lit with fire and the babies were placed in the fire as the drums were playing to drown out the cries of the child. The larger issue is not that the culture worshipped Baal but that God’s people had also become loyal to Baal while attempting to worship Yahweh as well.
Lest we think this has no relevance to us today, remember that several media outlets recently carried the report of arches to Baal being built in New York and London. Because there was such a strong backlash from the Christian community, those projects were placed on hold. However, one needs to read the fine print that said 1000 of these Baal arch/temples were scheduled to be constructed around the world. It is clear we are surrounded by 21st century Baal worship. Unrestrained, legalized, sexual immorality, abortion and extreme environmentalism called climate change is nothing more than Baal worship under a new name called progressivism.
Remember though, that God never allows the spirit of Baal to reign without being confronted by the spirit of Elijah. As God raised up a passionate follower of God in the Old Testament, He is raising up people in the body of Christ who have no other desire but to see the honor of Jesus in the land. Get ready: A fresh confrontational, powerful and corrective grace is coming to true believers to tear down the altars of men and rebuild the altars of God!

Adrenochrome
Today's Baal Worshipers
Hillary Clinton and Jezebel
Levels of Spiritual Warfare
Binding the Strongman Over America
Posted by Tim Shey at 9:19 AM