After the Power of an Endless Life 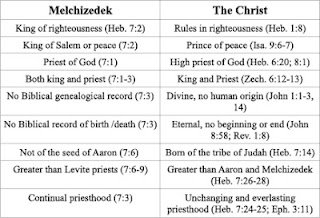 Hebrews 7: 11: “If therefore perfection were by the Levitical priesthood, (for under it the people received the law,) what further need was there that another priest should rise after the order of Melchisedec, and not be called after the order of Aaron?”

Hebrews 7: 14-17: “For it is evident that our Lord sprang out of Juda; of which tribe Moses spake nothing concerning priesthood. And it is yet far more evident: for that after the similitude of Melchisedec there ariseth another priest, Who is made, not after the law of a carnal commandment, but after the power of an endless life. For he testifieth, Thou art a priest forever after the order of Melchisedec.”

Hebrews 7: 19: “For the law made nothing perfect, but the bringing in of a better hope did; by the which we draw nigh unto God.

Genesis 14: 18: “And Melchizedek king of Salem brought forth bread and wine: and he was the priest of the most high God.”

Abraham met Melchizedek before the covenant of circumcision and before the giving of the Law to Moses. Melchizedec is the Lord Jesus Christ. This meeting was the great foreshadowing of man meeting Christ (in faith) so that we can commune with God the Father.

The covenant of circumcision was a foreshadowing of the cutting away of demonic bondage in our body and soul so that we could have a more perfect, intimate, spiritual union with God. Circumcision (physical or spiritual) makes us a peculiar people—a people not conformed to this world—a Blood-washed people worthy to receive the powerful and glorious Presence of God—Rapture!

“For it is evident that our Lord sprang out of Juda; of which tribe Moses spake nothing concerning priesthood.” In Jacob’s prophecy in Genesis 49: 8-12, the tribe of Judah gets a powerful blessing from a great man of God. Jacob prophesies of the Messiah (Shiloh, verse 10) and of the First and Second Coming (verses 11 and 12, respectively). It is fitting that Jacob’s prophecy of the Messiah precedes Leviticus and Deuteronomy (the Law). The Messiah is before and after the Law, because he is greater than the Law: He is the Alpha and the Omega.

Abraham and Jacob were men of great faith. Moses was greatly used by God, but he acted in haste and in unfaith (sin) and struck the rock at the water of Meribah, so he was not able to enter into the Promised Land. The most important nation in the history of this planet is named after Jacob: Israel. The words of Israel precede (supercede?) the Law; the nation of Israel was formed (1948) after the Law, the Prophets and the New Testament were given. As we can see, the words of Israel have endured the test of time. Through Israel came the Lord Jesus Christ—the priest of the most high God—“by which we draw nigh unto God.” If we abide in Christ, we will also be of the order of Melchizedek: “after the power of an endless life.”
Posted by Tim Shey at 6:36 PM

Email ThisBlogThis!Share to TwitterShare to FacebookShare to Pinterest
Labels: Rapture is Spiritual (not physical or bodily), The Order of Melchizedek: the Lord Jesus Christ