The Miraculous Defeat of the Spanish Armada, 1588 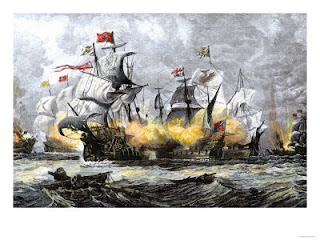 “The Miraculous Defeat of the Spanish Armada, 1588”

Pages 57-58: “Satan hates revival and will try to stop it anyway he can. The Catholic monarchs of France caused 72,000 Protestants (Huguenots) to be massacred on one day in 1572. Finding that persecution only strengthened the movement in England, Satan attempted to stamp it out by war.

“In 1588, Philip II of Spain sent the Spanish Armada to bring England again under the domination of Rome. A historian of the period, Richard Hakluyt writes of this event:

‘It is most apparent, that God miraculously preserved the English nation. For the L. Admiral wrote unto her Majestie that in all humane reason, and according to the judgement of all men (every circumstance being duly considered) the English men were not of any such force, whereby they might, without a miracle dare once to approach within sight of the Spanish Fleet: insomuch that they freely ascribed all the honour of their victory unto God, who had confounded the enemy, and had brought his counsels to none effect. . . . While this wonderful and puissant navy was syling along the English coastes, . . . all people throut England prostrated themselves with humble prayers and supplications unto God: but especially the outlandish churches (who had greatest cause to feare, and against whom by name the Spaniards had threatened most grievous torments) enjoyned to their people continual fastings and supplications. . . knowing right well, that prayer was the onely refuge against all enemies, calamities, and necessities, and that it was the onely solace and reliefe for mankind, being visited with afflictions and misery. . . .’

“God had providentially intervened to protect His people and ensure that England would fulfill its purpose as a nation. Even the nation of Holland acknowledged the hand of God. In commemoration of the event, they minted a coin. On one side were ships sinking; on the other, men on their knees in prayer with the inscription: ‘Man Proposeth, God Disposeth,’ and the date ‘1588’.”