Matthew 6: 12: “Forgive us our debts, as we also have forgiven our debtors.”

Principle One: Forgiveness is not a means of changing another but rather is the avenue of release for the one holding the debt. “Lord, how many times shall I forgive my brother when he sins against me? Up to seven times?”

Principle Two: Forgiveness requires that we take a full account of the debt. “…a king who wanted to settle accounts with his servants. As he began the settlement, a man who owned him ten thousand talents was brought to him…”

Principle Three: The debtor does not have the means to repay the debt. “Since he was not able to pay…”

Principle Four: Anger is a normal reaction to injustice, but it must be released before freedom will come. “Since he was not able to pay, the master ordered that he and his wife and his children and all that he had be sold to repay the debt.”

Principle Five: The integrity and sincerity of the indebted offender is not critical for true forgiveness to be administered. “The servant fell on his knees before him. ‘Be patient with me,’ he begged, ‘and I will pay back everything.’”

Principle Six: Genuine forgiveness requires we find compassion. “The servant’s master took pity on him, canceled the debt and let him go…”

Principle Seven: Forgiveness benefits the forgiver more than the forgiven. The king “canceled the debt and let him go. But when that servant went out, he found one of his fellow servants who owed him a hundred denarii. He grabbed him and began to choke him. ‘Pay back what you owe me!’ he demanded.”

Principle Eight: Forgiveness should not be confused with reconciliation.

RESENTMENT IS LIKE TAKING POISON AND THEN WAITING FOR THE OTHER PERSON TO DIE. HANGING ON TO RESENTMENT IS LETTING SOMEONE YOU DESPISE LIVE RENT FREE IN YOUR HEAD. 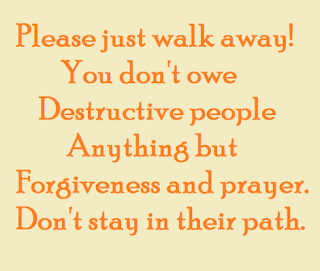