Lamentations 3: 64-66:  "Render unto them a recompence, O LORD, according to the work of their hands.  Give them sorrow of heart, thy curse unto them.  Persecute and destroy them in anger from under the heavens of the LORD."

Lamentations 4: 13-14:  "For the sins of her prophets, and the iniquities of her priests, that have shed the blood of the just in the midst of her,  They have wandered as blind men in the streets, they have polluted themselves with blood, so that men could not touch their garments."

Welcome to Jackson
Tourist, stop and rest
Home of the rich and famous
Death Camp of the West

[*The town of Jackson is built on the Snake River.  **Brent Blue is the abortionist.]

This is a letter that Randy Sheets sent to Marie Stopes International:

"I thought you'd like to know that my wife delivered a beautiful, healthy baby girl that your clinic here in Nha Trang Vietnam told my wife to have an abortion because the baby didn't have a heartbeat.

"When my wife was about a month pregnant she happily and so proud left the house that morning to go to your clinic here because someone told us Marie Stopes was the best Women's health clinic in Nha Trang and one of the top in Vietnam.  When she came home about an hour later she was crying and emotionally torn up. YOUR CLINIC told her the baby didn't have a heart beat (you dumb asses) don't even know that sometimes a heart beat isn't audible until 12 weeks.,  But your office was hoping my wife would be like the countless other ignorant, uneducated young girls, who believe anything a doctor tells them, but unfortunately for you, I am an American, educated, retired Naval Officer who immediately saw something seriously wrong with her report.

"It took me 2 hours to get her calmed down and after talking nonstop and showing her countless internet articles I finally got her to believe that your company is EVIL. and that you do abortions in fact push abortions.. I did some research on you guys.    By the way, she told me later that one of her friends had an abortion from you because their babies didn't have a heart beat.....

"So, wanted you to know you have God to answer to.  You're cursed and God will surely judge and has judged you all in all of your evil affairs.

Here is a comment from "Abortion Protests and Counter Protests in Full Swing in Jackson" (Channel 8 News; Idaho Falls, Idaho):


randycrawford52241
"I was in Jackson a week previously with Missionaries to the Preborn's aborted baby pictures, and found a lot of the residents are shortsighted selfish bloodthirsty pro-aborts, but there are many good residents too who understand abortion is murder.  They appreciated our graphic abortion signs which show how vicious the abortion industry is.  The Jackson police learned from their local courts to not trample on the Constution any more, so at last notice the Jackson law enforcement personnel were being reasonable about the First Amendment even while local pro-aborts were trying imaginative dirty tricks like trying to con traffic into driving around the pictures that reveal what abortion is.  The fact the babykilling industry works so hard to avoid and cover up the vile butchery of abortion shows how scared they are of the truth coming out.  They claim they are 'protecting children' from seeing slaughtered babies, but in reality kids like to see the gore just like they do at Halloween, and in reality the pro-aborts don't want to have to explain to their children that they have already murdered their missing brothers and sisters.  Their unresolved guilt will continue to torment them until they sincerely confess and repent, as many have already learned to do."

Jeremiah 31: 15:  "Thus saith the LORD; A voice was heard in Ramah, lamentation, and bitter weeping; Rahel weeping for her children refused to be comforted for her children, because they were not." 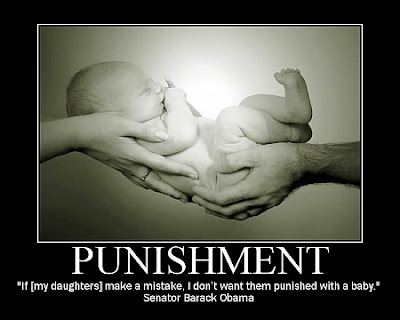