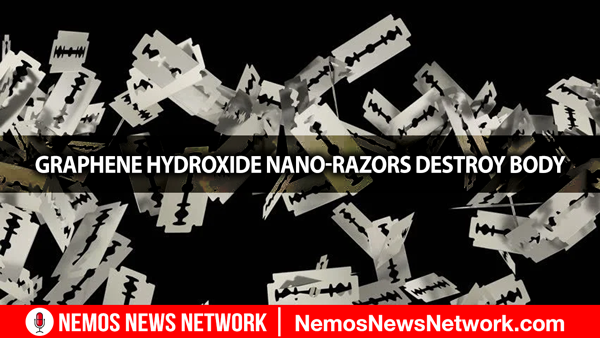 Here are some quotes from the video above:

"People bleed to death on the inside."

"As a chemist, if you inject this into the blood, you know you are a murderer."

"It's a new material, toxicologists are not aware of it yet."

"Why are these razor blades in the vaccine?"

"Everyone is talking about the messenger RNA which has complex effects.  The theory of mRNA is complex.  But every chemist understands what this (the graphene hydroxide) does.  You see the mRNA story is possibly a diversion."

"I cannot imagine anyone will be able to give me as a carbon specialist a proper explanation why these carbon razor blades are in the vaccine."

"This is war.  They distract us with the messenger RNA."

"Any doctor in Austria, who, after this information is now public, continues to inject this, is a murderer."

"But if you hit a vein, and the batches contain different amounts of GHO [graphene hydroxide], then you have to know you are cutting people up from the inside.  And it is a highly intelligent poison."

"As a chemist, I vouch for the fact that these are nanoscale razor blades."

"This material has zero biological degradability.  It stays in the body forever.  Even if people don't drop dead immediately, it cuts up the blood vessels little by little.  It destroys the heart.  All the heart attacks.  All the strokes.  As a doctor, you have to ask, where is this coming from?  If you understand that razors are being injected, it is clear why all the cardiovascular diseases appear.  The heart is cut up.  The brain is cut up.  Blood vessels are cut up."

"They are first to impose a vaccine mandate.  They are killing the whole Austrian nation."

GRAPHENE RAZOR BLADES IN THE BLOODSTREAM:  DEATH BY A THOUSAND CUTS

Pictures of the Dead from Bio-Weapon Injections

A message to the unvaccinated - You have passed an unimaginable test

Revelation 6:8:  "And I looked, and behold a pale horse: and his name that sat on him was Death, and Hell followed with him. And power was given unto them over the fourth part of the earth, to kill with sword, and with hunger, and with death, and with the beasts of the earth."