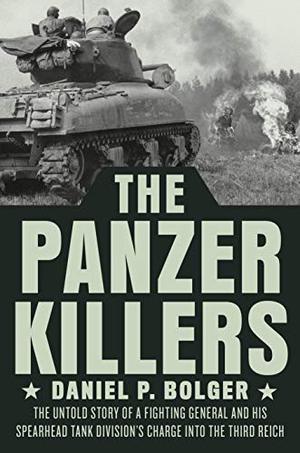 A few days ago, a friend gave me this book.  He found it at his girlfriend's house.  He thought I would like to read it.  The book is The Panzer Killers by Daniel P. Bolger (2021).  Being given this book is Providential and prophetic.

The Panzer Killers is about Major General Maurice Rose (1899-1945) and his service in World War II.  Rose was a tough-as-nails general who led from the front.  He was killed in action on 30 March 1945.

It was an excellent read.  It is Providential because it mirrors what is happening in the world today with the worldwide military operation that is taking down the Deep State.  Since at least 2016, the Deep State, the CCP, the World Economic Forum and the George Soros-funded globalist criminals have been exposed to the world.  From here on out, I believe that the Deep State is in the process of being destroyed.

In World War II, there were months and months of planning that took place to prepare for the Invasion of Normandy in June of 1944.  In the worldwide war on the Deep State, it took many years of planning by military generals to get to where we are at today.  I believe that most of the exposure of the Deep State players is done.  Now comes the destruction of the Deep State--the wrath of God, the justice of God.  Someday someone will have to write a book titled The Deep State Killers.

Here are excerpts from The Panzer Killers:

Pages 193-194:  "Four days earlier and a lifetime ago, before the German onslaught, Hodges invited Major General Maurice Rose to the VII Corps command post near an abandoned segment of the West Wall.  Joe Collins was there, of course.  With hardly any preliminaries, the reticent First Army commander genuinely surprised Rose with an impromptu presentation.  As a junior officer read the citation, Hodges stepped directly in front of this taller subordinate and pinned on the Distinguished Service Cross, America's second-highest valor award.  Only the Medal of Honor stands higher.  The citation referred to Rose's 'extraordinary heroism' and 'intrepid actions, personal bravery and zealous devotion to duty' from September 6 through September 9, 1944, during the advance across Belgium.  As Hodges's aide wrote afterward, Rose was 'one of his [Hodges's] favorite generals.'  That constituted a very exclusive set given Hodges's dour demeanor and disinterest in most of those he outranked."

Page 199:  "So the 3rd Armored Division was very close, and arriving just time, too.  There were a hell of a lot of panzers out there.  Ridgway hadn't served with Maurice Rose.  But he'd heard of him, and later thought Rose 'one of the most gallant soldiers I have ever known.'  It takes one to know one."

"Rather than simply swap like for like, at 5:1, 10:1, or even 1;1, Maurice Rose and his men learned to use all their panoply of armaments.  As Rose expressed in a formal report that went to General Eisenhower, 'We compensate for our inferior equipment by the efficient use of artillery, air support, and maneuver.'  It was the familiar prescription.  Send a bullet, not a man.  Rose believed in it, taught it, and insisted on it.  He was right there to make sure it worked."

Page 271:  "As for Major General Joe Collins, who was friendly enough, the relationship remained strictly professional.  Collins assessed Rose as 'not given to easy comradeship' due to being 'somewhat stern.'  That 'somewhat' was a generous touch.  Whatever boiled inside, Rose's armor held.  'I never knew a man,' recalled reporter Hal Boyle, 'who so ruthlessly and cold bloodedly set about destroying an enemy.'  Rose was what he did."

"Exposure is the step before elimination."