Are We Disciplined to Obey Christ? - Oswald Chambers 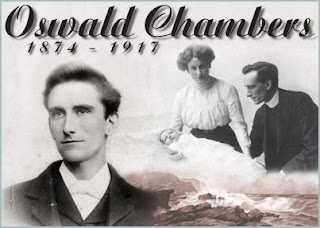 An excerpt from My Utmost For His Highest by Oswald Chambers:

"Bringing into captivity every thought to the obedience of Christ." 2 Corinthians 10:5

"This is another aspect of the strenuous nature of sainthood. Paul says, 'I take every project prisoner to make it obey Christ.' (Moffatt.) How much Christian work there is to-day which has never been disciplined, but has simply sprung into being by impulse! In Our Lord's life every project was disciplined to the will of His Father. There was not a movement of an impulse of His own will as distinct from His Father's -- 'The Son can do nothing of Himself.' Then take ourselves -- a vivid religious experience, and every project born of impulse put into action immediately, instead of being imprisoned and disciplined to obey Christ.

"This is a day when practical work is overemphasized, and the saints who are bringing every project into captivity are criticized and told that they are not in earnest for God or for souls. True earnestness is found in obeying God, not in the inclination to serve Him that is born of undisciplined human nature. It is inconceivable, but true nevertheless, that saints are not bringing every project into captivity, but are doing work for God at the instigation of their own human nature which has not been spiritualized by determined discipline."
Posted by Tim Shey at 2:42 PM

Email ThisBlogThis!Share to TwitterShare to FacebookShare to Pinterest
Labels: My Utmost For His Highest, Obedience, Obedience to the Lord, Oswald Chambers