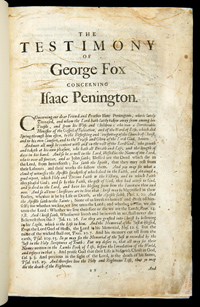 "BABYLON is the spiritual fabric of iniquity; the mystical great city of the great king of darkness; built in imitation of Zion, painted just like Zion, that it might be taken for Zion, and be worshipped there, instead of the true, eternal, ever living God, and King of Zion."

"And here, in this there is a great difference between the vessels of Zion, and the vessels of Babylon. The vessels of Zion, they are weak, earthen, foolish, contemptible to the eye of man's wisdom, (which cannot look for any great matter of excellency there); but the treasure, the liquor of life in them, is precious. The vessels of Babylon make a great show, appear very holy, very heavenly, very zealous for God and Christ, and for the setting up of his church and ordinances all over the world. Thus they appear outside; but they are sepulchers; there is rottenness within. Under all this there lodges an unclean, an unsanctified heart; a heart unsubdued to the spirit and power of the gospel, while it makes such a great show of subjection and obedience to the letter."

"But their souls never knew the fire in Zion, and the furnace in Jerusalem; by which the very inwards of their spirits must be cleansed, before the pure eye of life is opened which can see Zion."

"And it is a spiritual city, a mystical city, a city built by the working of the mystery of iniquity, 2 Thes 2:7. whereupon she is called mystery. Rev 17:5. It is not a city of plain wickedness, but a city of sin that is hidden; of sin keeping its life under a covering, under a form of godliness; of sin reigning in the heart under zeal, under devotion, under praying, believing, worshipping, hoping, waiting, etc. Where sin lies hidden within under these, there is Babylon; there is the mystery of witchcraft; there is the painted throne of Satan; there is spiritual Egypt and Sodom, where the Lord of life is daily crucified. This is the city, the mystical city, the spiritual city. Rev. 11:8."

Babel--"1. The site of a tower reaching to heaven whose construction was interrupted by the confusion of tongues, according to the Old Testament. 2.a. A confusion of voices or sounds. b. Noise and confusion."

Joshua 7: 20-21: "And Achan answered Joshua, and said, Indeed I have sinned against the LORD God of Israel, and thus and thus have I done: When I saw among the spoils a goodly Babylonish garment, and two hundred shekels of silver, and a wedge of gold of fifty shekels weight, then I coveted them, and took them; and, behold, they are hid in the earth in the midst of my tent, and the silver under it."

II Timothy 2: 16: "But shun profane and vain babblings: for they will increase unto more ungodliness."

A Pile of Rocks--something much more alive in Christ than a Babylonish church.

Babylon the Great
Posted by Tim Shey at 12:47 PM