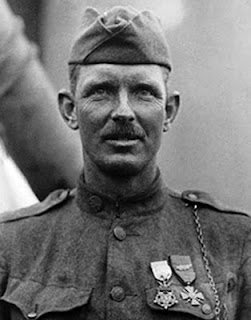 Alvin York: “On October 6th, 1918, he was in a reconnaissance group of sixteen men sent to locate the German division responsible for the deadly machine gun fire that was pinning down his American unit.

“Stepping out of a thicket in the Argonne Forest, all sixteen men walked unknowingly right into the fire from thirty-five machine guns.  Ten of the mountaineer’s followers were killed instantly and two others were wounded but dashed back into the thicket.  So did the three other men in the group.  But red-headed Alvin York was angry.  He stood his ground.

“Every time a gunner peeped over the rim of his machine gun nest, York sent a rifle bullet through his head.  Oblivious to the German bullets, he stood erect and downed the enemy with deadly accuracy.  When the German officer sent a bayonet squad after him, York picked off each of the men, beginning with the last one and finally dropping the leader.

“Amazed at his prowess, the German Major called out that he would surrender his entire force if York would cease firing.  York agreed, and marched 132 prisoners, including three officers back to his own lines.

“‘It was a higher power that shielded us,’ York said years later.  ‘The man on my right and the man on my left were shot to pieces.  I never got so much as a scratch or a cut on my uniform.’”

Psalm 91: 7: “A thousand shall fall at thy side, and ten thousand at thy right hand; but it shall not come nigh thee.”

Isaiah 54: 17: “No weapon that is formed against thee shall prosper.”

Psalm 34: 7:  “The angel of the Lord encampeth round about them that fear him, and delivereth them.”

Psalm 34: 21:  “Evil shall slay the wicked: and they that hate the righteous shall be desolate.”

"Among the soldiers charged with carrying out Liggett's plan was a tall, heavily freckled soldier with a thick red mustache, Corporal Alvin C. York.  A deeply religious, semiliterate farmer from Fentress County, Tennessee--one of the poorest counties in the United States--York was a draftee and deeply uncomfortable with shedding human blood, whatever the cause.  The War Department refused to grant him conscientious objector status, however, and his battalion commander and others succeeded in convincing him that military service was not inconsistent with God's word.  York served, but he never grew comfortable with war.  Bayonet training with straw dummies left him feeling 'queer to think I might have to cut up human beings.  I still didn't want to kill.  I still did feel somehow that it was wrong--terrible wrong for human beings to take each other's life.'

"All of which is not to say that York felt at all uncomfortable with guns.  He grew up in an era when guns and hunting were inescapable staples of American rural life, and like Jack Barkley, another country boy, he was an excellent marksman.  Yet York was a different kind of man.  Where Barkley, like many Doughboys, thrived on gambling, drinking, cussing, and combat, York preferred the simple life.

"'I had put all of the drinkin' and fist-fightin' away behind me.  I left it back home on the Kentucky line.  I didn't have a drink all the time I was in France.  I didn't have a fist fight or an argument.  I didn't swear or smoke either.  I wasn't any better'n any of the other boys.  It was jes my way of livin', that was all.'

"York said nothing about the Lost Battalion in his diary in early October.  Other thoughts occupied his mind.  'We went out on the main road,' he wrote on October 5th, 'and lined up and started for the front and the Germans was shelling the road and airoplanes was humming over our heads and we were stumbling over dead horses and dead men and shells were Bursting all around me.'  Faced with such sights, he could only look up to Heaven and spread his hands.  'Then it was,' he wrote, 'that I could see the Power of God helped man if he would only trust him.'  That--and a steady rifle."