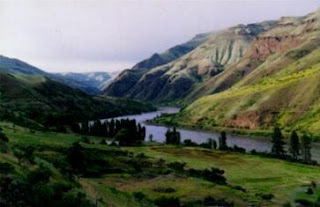 A few days ago, I was hitchhiking south of Grangeville, Idaho and this guy named Charlie picked me up.  He was a Christian and he was going all the way to Arizona.

We were somewhere south a number of miles when he said, “We’ve been here before.”

“No,” he said.  “I had a dream a while back.  In the dream I picked you up and gave you a ride.  It was as if the Lord was telling me that it would be a good trip.”

“Wow.  Really?” I said.  “That’s pretty incredible.”  I was flabbergasted.

Charlie bought me something to eat in New Meadows.  He took me all the way to Fruitland, Idaho where we had a powerful prayer meeting.  I told him that the Lord was bringing him to a new place so that he could start over again—a new beginning.  I knew he would have a very blessed trip.