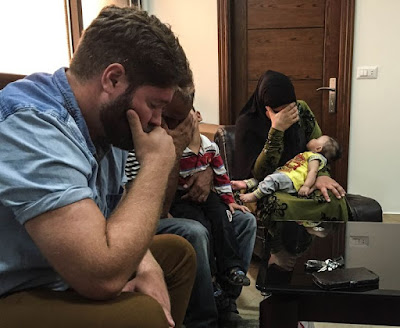 This is from the website Open Doors:
The Islamic State has been filling the headlines for a long time and filling the hearts of many people in the Middle East with fear. But in the midst of all this, the church in the Middle East is showing the love of Christ to those who fled their homes. Muslims in the Middle East are turning to Jesus in unprecedented numbers.
Before the war, it was rare that a Muslim would become a follower of Jesus Christ. The war has changed everything. According to one of the Christian workers of a church in Lebanon, many new converts say they had their doubts about Islam before they converted. “Doubt is many times the key to start a change,” says the church worker.
We meet with Amir*, Rasha* and their two children, who fled from Homs. Proof of the extraordinary change lies in her arms sleeping —a five month old baby girl with the very Christian name Christina.
“Since 2012, we have been living in a tent,” Amir shares. “It is not an easy life. About a year ago my wife’s mother was killed by a sniper when she went out to have some fresh air. My wife’s brother was killed on his way home.”
The life of this family was and is still hard, but recently they found light in their life. “About three months ago, I was given a vision of Jesus Christ,” Rasha shares. “I was sleeping and all of a sudden I saw Jesus Christ in white. He said ‘I am Christ. You will have a beautiful daughter.’ I was eight months pregnant, and a month later we received our beautiful daughter.” At about the same time the husband had a dream, too. “I saw Jesus Christ. He was dressed in white. He said to me ‘I am your Savior. You will follow me.’”
“We’re Afraid Now”
Both Amir and Rasha made a bold decision after these dreams. “We decided to follow Him. We named our baby Christina. We left our old Islamic customs.” Amir stopped going to the mosque, but Rasha still dresses as a Muslim woman with her head covered by a veil. “Our clan is very big; we’re afraid now. They might kill us,” says Rasha.
Amir continues: “Our family knows we are Christians now. Becoming a Christian is, for them, the same as if I had destroyed the Kaaba in Saudi Arabia. It is because we walked in the darkness and are now in the light. I want to protect my family.”
Because of the danger, they didn’t want to continue living in the tent in the camp where mainly Muslims live. With her soft and sad voice Rasha says: “We now have no fixed place to live, we go from place to place.”
Back home in Syria, Amir worked as a carpenter. “I have no work in Lebanon. Our financial situation is bad. Now, because we are Christians, others don’t want to help us. The church is helping as much as is possible.”
Gesturing with their hands and faces, they say they don’t know what the future will bring. “The most important thing is that we know Jesus Christ as our Savior,” the man adds. “He will save us. We regularly pray to the Lord, we freely worship Him, and He protects us. God is with us. God will resolve our situation.”