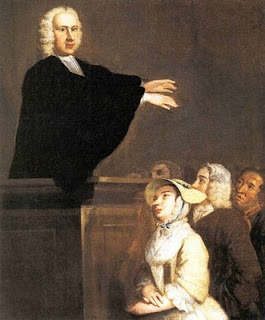 Moby-Dick or, The Whale
By Herman Melville

Pages 51-52: “Father Mapple rose, and in a mild voice of unassuming authority ordered the scattered people to condense. ‘Starboard gangway, there! side away to larboard—larboard gangway to starboard! Midships! Midships!’

“There was a low rumbling of heavy sea-boots among the benches, and a still slighter shuffling of women’s shoes, and all was quiet again, and every eye on the preacher.

“He paused a little; then kneeling in the pulpit’s bows, folded his large brown hands across his chest, uplifted his closed eyes, and offered a prayer so deeply devout that he seemed kneeling and praying at the bottom of the sea.”

“Nearly all joined in singing this hymn, which swelled high above the howling of the storm. A brief pause ensued; the preacher slowly turned over the leaves of the Bible, and at last, folding his hand down upon the proper page, said: ‘Beloved shipmates, clinch the last verse of the first chapter of Jonah—“And God had prepared a great fish to swallow up Jonah.”

“‘Shipmates, this book, containing only four chapters—four yarns—is one of the smallest strands in the mighty cable of the Scriptures. Yet what depths of the soul does Jonah’s deep sealine sound! what a pregnant lesson to us is this prophet! What a noble thing is that canticle in the fish’s belly! How billow-like and boisterously grand! We feel the floods surging over us; we sound with him to the kelpy bottom of the waters; sea-weed and all the slime of the sea is about us! But what is this lesson that the book of Jonah teaches? Shipmates, it is a two-stranded lesson; a lesson to us all as sinful men, and a lesson to me as a pilot of the living God. As sinful men, it is a lesson to us all, because it is a story of the sin, hard-heartedness, suddenly awakened fears, the swift punishment, repentance, prayers, and finally the deliverance and joy of Jonah. As with all sinners among men, the sin of this son of Amittai was in his wilful disobedience of the command of God—never mind now what that command was, or how conveyed—which he found a hard command. But all the things that God would have us do are hard for us to do—remember that—and hence, he oftener commands us than endeavors to persuade. And if we obey God, we must disobey ourselves; and it is in this disobeying ourselves, wherein the hardness of obeying God consists.’”

Pages 56-57: “‘Shipmates, God has laid but one hand upon you; both his hands press upon me. I have read ye by what murky light may be mine the lesson that Jonah teaches to all sinners; and therefore to ye, and still more to me, for I am a greater sinner than ye. And now how gladly would I come down from this mast-head and sit on the hatches there where you sit, and listen as you listen, while some one of you reads me that other and more awful lesson which Jonah teaches to me, as a pilot of the living God. How being an anointed pilot-prophet, or speaker of true things, and bidden by the Lord to sound those unwelcome truths in the ears of a wicked Nineveh, Jonah, appalled at the hostility he should raise, fled from his mission, and sought to escape his duty and his God by taking ship at Joppa. But God is everywhere; Tarshish he never reached. As we have seen, God came upon him in the whale, and swallowed him down to living gulfs of doom, and with swift slantings tore him along “into the midst of the seas,” where the eddying depths sucked him ten thousands fathoms down, and “the weeds were wrapped about his head,” and all the watery world of woe bowled over him. Yet even then beyond the reach of any plummet—“out of the belly of hell”—when the whale grounded upon the ocean’s utmost bones, even then, God heard the engulphed, repenting prophet when he cried. Then God spake unto the fish; and from the shuddering cold and blackness of the sea, the whale came breeching up towards the warm and pleasant sun, and all the delights of air and earth; and “vomited out Jonah upon the dry land;” when the word of the Lord came a second time; and Jonah, bruised and beaten—his ears, like two sea-shells, still multitudinously murmuring of the ocean—Jonah did the Almighty’s bidding. And what was that, shipmates? To preach the Truth to the face of Falsehood! That was it!

“‘Delight is to him, who gives no quarter in the truth, and kills, burns, and destroys all sin though he pluck it out from under the robes of Senators and Judges. Delight, --top-gallant delight is to him, who acknowledges no law or lord, but the Lord his God, and is only a patriot of heaven. Delight is to him, whom all the waves of the billows of the seas of the boisterous mob can never shake from this sure Keel of the Ages. And eternal delight and deliciousness will be his, who coming to lay him down, can say with his final breath—O Father! —chiefly known to me by Thy rod—mortal or immortal, here I die. I have striven to be Thine, more than to be this world’s, or mine own. Yet this is nothing; I leave eternity to Thee; for what is man that he should live out the lifetime of his God?’

“He said no more, but slowly waving a benediction, covered his face with his hands, and so remained kneeling, till all the people had departed, and he was left alone in the place.”

The Wreck of the Whaleship Essex
Billy Budd
The Jerry Shey Family
The 100 best novels:  No 17--Moby-Dick by Herman Melville (1851)
The Rejection Letters:  How Publishers Snubbed 11 Great Authors
Posted by Tim Shey at 11:26 AM