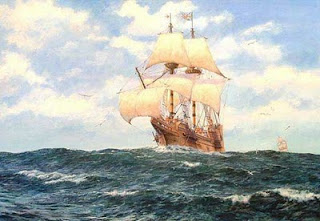 Last night I was watching the History Channel. There was this program about the history of the United States. They were showing the founding of Jamestown (1607) in Virginia and Plymouth Colony (1620) in Massachusetts. The narrator said that ten percent of the population of the United States can trace their ancestry to the fifty people that survived the winter of 1620-21 at Plymouth Colony. Sounds like a mustard seed of faith in God: the Lord blessing and multiplying the work of His faithful saints--or the Lord working through his saints.

The Pilgrims that came on the Mayflower from England to America wanted relgious freedom--freedom to worship God. Ten percent of the population of the United States would be thirty million people who can trace their ancestry to the Mayflower and Plymouth Colony.

A Journey to the New World:
The Diary of
Remember Patience Whipple
Mayflower, 1620

“The reason for our journey is our religion. You see, we are not the Pope's people nor the King's really, but God's people. We are Saints of the Holy Discipline. ‘Saints’--for short. That is what all of us English who went to Holland are called. And if we go to this New World, free from old King James and all the fancy church rituals that are not to our way, we can worship as we want. You see, we believe that the church is in our heart and not in a building. So tis our hearts that lead us.”

A Journey to the New World
Posted by Tim Shey at 10:20 AM