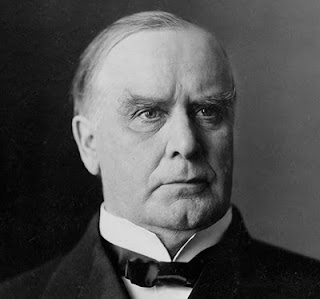 “As President he relied for such knowledge upon John Sherman, and God (who appeared to McKinley in a dream and told him to keep the Philippines).”


"McKinley had other concerns behind his decision to go to war. He was constantly being criticized by Theodore Roosevelt and other warmongers for a 'lack of backbone'. (Of course, in the hysterical frenzy of 1898, not supporting war was actually a very brave stand.) McKinley also was afraid that not going to war would give the Democrats and his arch-nemesis, William Jennings Bryan, a campaign issue to use against the Republicans in 1900. McKinley knew that if he refused to send in the troops after Congress declared war, the Democrats would use this fact to destroy him in the 1900 election. Finally, a highly devout Christian, McKinley claimed to have been commanded in a dream to send the country to war. Conveniently, the religious experience coincided perfectly with the various pressures forced on McKinley at the time. And even at the same time as he committed the US to war because of a belief in democracy and a religious experience, he still couldn't help but hope that, 'perhaps it will pay.'"

["Finally, a highly devout Christian, McKinley claimed to have been commanded in a dream to send the country to war."  This reminds me of what T.S. Eliot wrote about John Milton:   "The civil war of the seventeenth century, in which Milton is a symbolic figure, has never been concluded. . ."  Essentially, the English Civil War in the 1600s is still being fought today throughout the world through Anglo-America (Christian) influence.

The Lord destroyed the Spanish Armada in 1588, so that England would be free of Spanish Catholic Slavery and so that the English would be free to propagate the Gospel of Jesus Christ throughout Great Britain and the rest of world through their future empire.  The Lord told President McKinley to go to war against Spain in 1898 to free Cuba, the Philippines, Puerto Rico, Guam and Havana from Spanish influence.  (I guess McKinley could have also invoked the Monroe Doctrine)]

"An incident well worth space here is that just before the shooting, at the reception, the President stooped to pet a little girl and to speak a kind word to the child's mother. The next person in the line was the assassin, Czolgolz. Two shots were fired, and when the President perceived the fury of the crowd toward his assailant, he cried : 'Let no one hurt him.'

"To those who bent over his death-bed, including his invalid wife, the dying President's last words were:

Passing of the Three Martyred Presidents

[William McKinley was President of the United States from 1897 to 1901; he was succeeded by Theodore Roosevelt after his assassination. McKinley fought the Spanish-American War and later annexed the Philippines, Puerto Rico, Guam and Hawaii; he set up a protectorate over Cuba.]