A Great Mulititude Followed Him 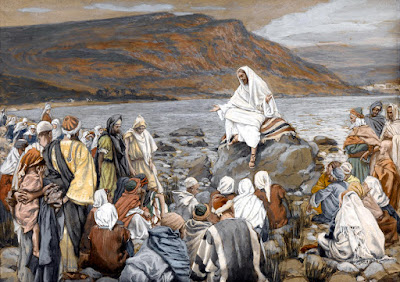 Mark 3: 7-8: “But Jesus withdrew himself with his disciples to the sea: and a great multitude from Galilee followed him, and from Judaea, and from Jerusalem, and from Idumaea, and from beyond Jordan; and they about Tyre and Sidon, a great multitude, when they had heard what great things he did, came unto him.” These two verses are very interesting. It says a great multitude followed Him—from Israel and outside of Israel. How many Scribes and Pharisees were among this multitude? How many theologians? How many of those who indulge in the knowledge of good and evil? The common man could see that Jesus was special. Some came to the conclusion right away that He was the Messiah. Some were curious and eventually called Him a teacher or a prophet.

Where were the temple types, the box makers, and the people in authority who told people what to do but did not do it themselves? I believe the word “hypocrite” means actor. Don’t act it; be it, live it. But as we know, the carnal, unsaved mind loves a power trip. The people in power—the temple priests—absolutely resented the life and work of Jesus. He was the real deal. He preached and taught with authority. He did not have a Ph.D. from Hebrew University. He lived by faith and revelation: His university was constant communion with His heavenly Father. Don’t get me wrong: there are a lot of inspired books that will feed your spirit, but we must be connected to the Source of all wisdom first and then indulge in the great books second. First things first. No doubt Hebrew University and Moody Bible Institute and Iowa State University have some very learned people who are totally dedicated to God. But without a relationship with the Lord Jesus Christ, there is no wisdom—just dead knowledge, information, hot air and glorified nonsense. With the fear of the Lord is the beginning of wisdom.

This multitude that followed Jesus were hungry for something—bread from heaven. Jesus’ words were spirit and they were life. Jesus Himself was bread that fed men’s souls. Why is it that from the age of fifteen through the age of eighteen I wanted to commit suicide? I had plenty of food, shelter and clothing. I was an atheist at that time and my life was exceedingly miserable because my spiritual life was dead. I needed the bread from heaven to sustain me. I began to pray to God when I was eighteen and I could feel grace come into my life. I was twenty-two when I became born-again and then I became engrafted into the Tree of Life. Even though I struggled with various sins in my early Christian walk, I at least knew where my food came from and, if I prayed for wisdom, He would give it to me.

Jesus withdrew himself to the sea, yet the multitude still followed Him. I would rather be a poor man in America than a rich man anywhere else. Why? Because a poor man in Christ still has the freedom to worship God in America than a rich man in China or Europe. Technically, I am poor, but in Christ, I am very rich. In America I still have the freedom to follow Jesus. Why are so many people still trying to emigrate or illegally immigrate to America? Because of the Gospel of Jesus Christ. Without the powerful influence of the Gospel in this nation, America would be just another third-world country. The economy, the social mores, the structure of our government is built on the Rock of the Lord Jesus Christ. An unbeliever who immigrates to this country may say that he came here for a good-paying job. How did that good-paying job come about? From thin air? No. There is a freedom in this country that lets believers and unbelievers be very creative and inventive—which help to create jobs. As a hitchhiker that lives by faith, I bet I live better than 90% of the people on this planet. Why? Because I am with the multitude that follow Jesus. The Lord feeds me, He heals me, He casts demons out of my body, He gives me wisdom—He is my economy, my social mores and my government.

And from beyond Jordan. Looks like some of John the Baptist’s buddies are following Jesus—you know, the drug addicts and prostitutes and prophets and hitchhikers who really don’t fit into the satanic-temple-priest-boxmaker-go-to-church-on-Sunday-lip-service-Christian construct. These people that come from beyond the Jordan want life and life in abundance. This life—this Tree of Life—does not come from the study of theology (theology means the study of God—God doesn’t wants us to study and analyze Him, He wants us to abide in Him in faith—not through dead reason) or by jumping through man-made hoops spawned by the traditions and rituals of men. This life can come only through a childlike heart that yearns and wants to follow the Master wherever He leads us. Come and follow Me--not come and think about Me or come and analyze Me. I know that there are strong Christians who are considered theologians, but I must speak bluntly: theology by its very nature and definition is Satanic: it is the Tree of the Knowledge of Good and Evil. Leo Tolstoy once said that theology is the Satanism of religion. This tree has a little bit of good, a lot of evil and leads to spiritual death. It is a stench that rises up to heaven; it is a tree that bears only dead fruit. Before you can study a frog, you have to kill it first.

When they heard what great things he did. Look at their reaction to the work of Jesus. They ran after Him. Look at the reaction of the Pharisees: they wanted to kill Him. They eventually did kill Him and they are still trying to kill Him. A Christian Pharisee is probably the most wicked man on this earth. They are so sure of their doctrine, they are very self-righteous and they prevent others from entering into the Kingdom of Heaven. “You call yourself a prayer walker? You hitchhike because the Lord told you to hitchhike? You don’t preach salvation? Where in Scripture does it say that?” The letter kills, but the Spirit gives life. Scripture interpreted by dead, Pharisaical, spiritless reason can only kill; Scripture interpreted by a childlike, Spirit-led heart can only give life. Some people miss Christ for the Bible verses: John 5: 39-40: “Search the scriptures; for in them ye think ye have eternal life: and they are they which testify of me. And ye will not come to me, that ye might have life.”