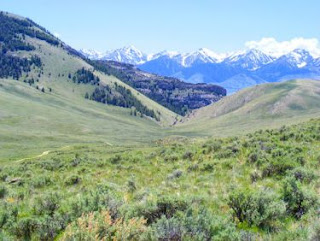 I am now in eastern Idaho with some friends probably till the rain passes. I got rained on pretty well while I was hitchhiking between Pocatello and Idaho Falls. It has been a rainy spring here in Idaho and in California. It could be raining for the next few days.

I saw this in the daily devotional that I love to read: My Utmost For His Highest by Oswald Chambers:

"The disciple who abides in Jesus is the will of God, and his apparently free choices are God's fore-ordained decrees. Mysterious? Logically contradictory and absurd? Yes, but a glorious truth to a saint."

I have always said that if I ever got stuck on a desert island, I would want a King James Bible and My Utmost For His Highest with me. Oswald Chambers is one of those great gifts to mankind that come around maybe once every one hundred years. He lived a short life (I believe he died at the age of 43), but he contributed so much to the Kingdom of Heaven. It was also providential that his wife, Biddy, was an excellent stenographer, so she was able to write down his teachings in short hand and later have his books published.

The more we die to self, the more we can see God and know God and do His will for our lives. I am a bond-slave of Jesus Christ and I am here to obey Him--eventhough it seems crazy where He leads me at times. We who abide in Christ, live in God's economy and not man's economy.