The Living Water of Bethlehem 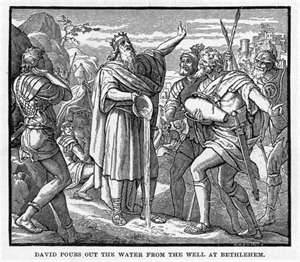 II Samuel 23: 14-17: “And David was then in an hold, and the garrison of the Philistines was then in Bethlehem. And David longed, and said, Oh that one would give me drink of the water of the well of Bethlehem, which is by the gate! And the three mighty men brake through the host of the Philistines, and drew water out of the well of Bethlehem, that was by the gate, and took it, and brought it to David: nevertheless he would not drink thereof, but poured it out unto the Lord. And he said, Be it far from me, O Lord, that I should do this: is not this the blood of the men that went in jeopardy of their lives? Therefore he would not drink it. These things did these three mighty men.”

Lesson 11. The Second Coming of Christ. Israel, Key to the Endtime (Assembly of God). Page 2:

“The British Mandate over the Holy Land was terminated on May 14, 1948, and on that same day the new State of Israel was proclaimed. As soon as the United Nations recognized Israel, war started between Arabs and Jews. Sensing an impending attack of great magnitude, Israel put her planes in the air on June 5, 1967, and wrecked 400 planes of the surrounding Arab armies in the first few hours of fighting. Two days later Israel’s soldiers broke through the gates of the old city of Jerusalem and ran through sniper fire to the Western Wall, the last remaining remnant of their temple. Gen. Moshe Dayan said, ‘We have returned to the holiest of our holy places and I give you my word, we shall never be parted from it again.’ It was in the possession of Israel for the first time in over 1,900 years. With the taking of the entire city, hope began to rise that the Messiah would soon appear.”

Matthew 16: 13-19: “When Jesus came into the coasts of Caesarea Philippi, he asked his disciples, saying, Whom do men say that I the Son of man am? And they said, Some say that thou art John the Baptist: some, Elias; and others, Jeremias, or one of the prophets. He saith unto them, But whom say ye that I am? And Simon Peter answered and said, Thou art the Christ, the Son of the living God. And Jesus answered and said unto him, Blessed art thou, Simon Barjona: for flesh and blood hath not revealed it unto thee, but my Father which is in heaven. And I say also unto thee, That thou art Peter, and upon this rock I will build my church; and the gates of hell shall not prevail against it. And I will give unto thee the keys of the kingdom of heaven: and whatsoever thou shalt bind on earth shall be bound in heaven: and whatsoever thou shalt loose on earth shall be loosed in heaven.”

“And David longed, and said, Oh that one would give me drink of the water of the well of Bethlehem, which is by the gate!”

“Israel’s soldiers broke through the gates of the old city of Jerusalem and ran through sniper fire to the Western Wall.”

“And upon this rock I will build my church; and gates of hell shall not prevail against it.”

Water. The water of Bethlehem. But how do we get to the water? We must break through the host of the enemy and defeat the gates of the enemy (the strategy of hell) in faith to partake of the living water—eternal life. And if we abide in this living water, we will have life and life in abundance (salvation and the Power of the Holy Ghost).

Now that we have the overcoming, revelatory Power of the Holy Ghost in our lives, we can more aggressively attack and destroy satanic strongholds in our lives and in the lives of others (intercession). “Upon this rock (revelation knowledge—what the Father reveals to us) I will build my church.”

“And the gates (the plans, the strategies) of hell shall not prevail against it.” Satan can defeat old revelation, but he cannot defeat fresh, new revelation. If a general gives an order to attack an enemy position within twenty-four hours, the enemy may intercept the message and defeat the attack. If the general gives an order to attack in ten minutes, it would be more difficult to intercept, analyze and decode (battlefield orders are encrypted) and prepare for an attack. That is why when the Lord tells me to jump, I ask how high. His thoughts are higher than my thoughts. I have some tactical and strategic understanding of things, but the Lord is the Great Strategist and I must obey Him when he tells me to move or to do this or to do that. Timing is absolutely everything in the Kingdom of Heaven. Perfect timing happens when we obey the Lord.

“Israel’s soldiers broke through the gates of the old city of Jerusalem.” They broke through the gates of the enemy because they obeyed the Lord. When encountering the strongholds of Satan, we must not act in our own fleshly wisdom or strength; we must obey the Lord and operate in His wisdom and strength—and in His perfect timing. It must be done in the anointing of the Holy Ghost.

“And the three mighty men broke through the host of the Philistines, and drew water out of the well of Bethlehem, that was by the gate, and took it, and brought it to David.” The three mighty men were successful in breaking through the host of the Philistines because they were obeying an anointed man of God, David. David was anointed because he was submitted to and obedient to the Lord God of Israel. If you obey a man that is not anointed of God, you will get into trouble real fast. The blind lead the blind into a ditch.

An anointed man’s words have great power even after death. The words of Moses, David, Isaiah, Elijah, Nahum, Zechariah, John the Baptist. . . . . John Wesley, Oswald Chambers, Smith Wigglesworth are always pointing towards Jesus. Their words are continually inspiring countless believers to engage and destroy the gates of the enemy, so that they too can partake of the living water of Bethlehem.

Email ThisBlogThis!Share to TwitterShare to FacebookShare to Pinterest
Labels: Destroy the Gates of the Enemy