The Sheep Hear His Voice 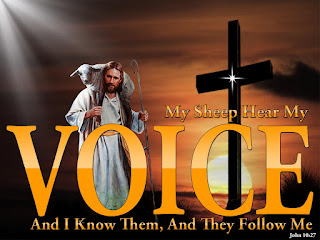 John 10: 1-5: "'Truly, truly, I say to you, he who does not enter the sheepfold by the door but climbs in by another way, that man is a thief and a robber; but he who enters by the door is the shepherd of the sheep. To him the gatekeeper opens; the sheep hear his voice, and he calls his own sheep by name and leads them out. When he has brought out all his own, he goes before them, and the sheep follow him, for they know his voice. A stranger they will not follow, but they will flee from him, for they do not know the voice of strangers.'"

"The sheep hear his voice."

"And the sheep follow him, for they know his voice."

I have met some strange Christians in my life. They attend strange churches that reject the Holy Ghost and worship the precepts and traditions of men--these traditions make void the Word of God. Strange, blind and deaf: the blind lead the blind into a ditch because they do not hear His voice.