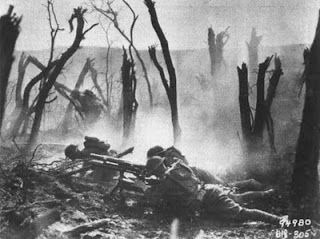 Last night I had a dream where I was lying on the ground of some battlefield. It was a scene right out of World War I. I was wearing a soldier’s uniform and helmet. I was crawling towards a trench lined with barbed wire; the trench was on a little higher ground than where I was. I ran into the trench and had to kill a German soldier. I took a grenade and stuck it into the German soldier’s belly and let it explode while the grenade was still in my hand: the German soldier died, but nothing happened to me. Then I was gripped with a very deep anguish because I had been killing people during the battle. I lifted my head up towards the sky and cried out, “Papa! Papa!” I began to pray in tongues and then the dream ended.

spiritualwarzone
Posted by Tim Shey at 10:41 AM