He Teacheth My Hands to War 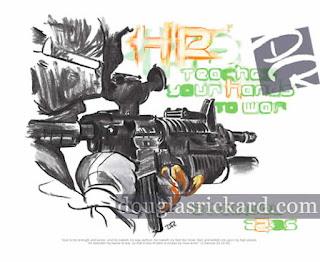 Psalm 18: 37-40: “I have pursued mine enemies, and overtaken them: neither did I turn again till they were consumed. I have wounded them that they were not able to rise: they are fallen under my feet. For thou hast girded me with strength unto the battle: thou hast subdued under me those that rose up against me. Thou hast also given me the necks of mine enemies, that I might destroy them that hate me.”

Psalm 18: 50: “Great deliverance giveth he to his king; and sheweth mercy to his anointed, to David, and to his seed for evermore.”
Posted by Tim Shey at 10:43 AM