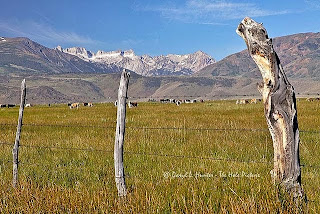 I am guessing in December of 2006, I was hitchhiking up U.S. 395 from someplace--maybe Ridgecrest, California--and heading north to Reno. I ended up in Bridgeport that evening.

I walked around Bridgeport for a while. I was looking for a barn or an abandoned car to crawl into to keep warm. It was going to get down below 20 degrees F that night. Finally, I walked over to the post office and put my backpack in the corner and sat on it for a while--I was cold and tired.

I had been sitting on my backpack for maybe half an hour, when this cop walked into the post office. He saw me sitting there and said, "Well, it's going to get cold tonight. This is probably the best place for you to sleep."

So the next day, I packed up my things and moseyed toward Reno.

Six months later, during the summer of 2007, I was again hitchhiking up U.S. 395. I got a ride from just north of Lee Vining to Bridgeport. It was a California Highway Patrolman. He was friendly and we had a nice chat.

He told me that he lived in Bridgeport. He said that sometime last winter, he walked into the post office and there was this guy sitting on his backpack.

"That was me!" I exclaimed.

"So you're the guy!" He started laughing.

"Thanks for not kicking me out of the post office. It was cold that night."

"No problem. The next time you come through Bridgeport during the winter, just go to the Sheriff's Department. They will let you sleep on a cot in the lobby."

[Originally published by Digihitch.com]
Posted by Tim Shey at 9:07 AM