Destroyed Them That Believed Not 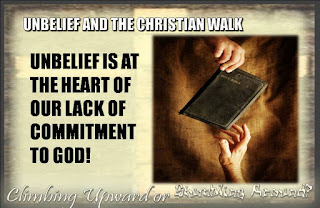 Jude 5-6: “I will therefore put you in remembrance, though ye once knew this, how that the Lord, having saved the people out of the land of Egypt, afterward destroyed them that believed not. And the angels which kept not their first estate, but left their own habitation, he hath reserved in everlasting chains under darkness unto the judgment of the great day.”

Most Christians I know are saved, but they don’t know the Lord. A minority of Christians know Jesus Christ as Lord. Lord means lordship, which means we are not doing our own will, but the will of the Father. There are many self-willed Christians in this world: they figure out the Bible in their heads and do their own thing calling it the will of God. These people need to really submit to Christ and let Him prune their vines and die to self. The less self in your life, the more God flows through your life.

A true Christian has abiding-in faith: he is believing in God every day of his life; he is living by faith everyday of his life. “There is therefore now no condemnation to them which are in Christ Jesus, who walk not after the flesh, but after the Spirit.” (Romans 8:1) A true Christian walks after (is led by) the Spirit. Also: “the letter kills, but the Spirit gives life.” Christians who are into the letter of Scripture and not into the Holy Ghost are under bondage; some people call this textualism. They need to break out of this bondage for them to be truly free in Christ. The Lord Jesus Christ isn’t just a bunch of Bible verses.

“Afterward destroyed them that believed not.” Some Christians think that salvation is some sort of formula: they say the Sinner’s Prayer, go to church on Sunday and memorize some Scripture. Do these people truly believe in God for their well-being or in some man-made construct that is spiritually dead? Christian Pharisees gravitate toward dead churches like stink does to excrement. True Christians are continually seeking God for His will in their lives: He is their provision and He is their protection; wise men still seek His face. We are to be a savor of life unto life to those who are called to eternal life, and of course we will be a savor of death unto death to those who are perishing. If we do not abide in Christ daily, why would we think that heaven is waiting for us when we die? Women usually leave their husbands because the husband does not spend time with and love his wife—and of course, if the wife does not respect and submit to her husband, the husband may have nothing to do with his wife. If the Bride of Christ does not abide in Him, then they are preparing an eternity in hell.

Hebrews 3: 12-19: “Take heed, brethren, lest there be in any of you an evil heart of unbelief, in departing from the living God. But exhort one another daily, while it is called To day; lest any of you be hardened through the deceitfulness of sin. For we are made partakers of Christ, if we hold the beginning of our confidence stedfast unto the end; While it is said, To day if ye will hear his voice, harden not your hearts, as in the provocation. For some, when they had heard, did provoke: howbeit not all that came out of Egypt by Moses. But with whom was he grieved forty years? was it not with them that had sinned, whose carcases fell in the wilderness? And to whom sware he that they should not enter into his rest, but to them that believed not? So we see that they could not enter in because of unbelief.”
Posted by Tim Shey at 9:11 AM