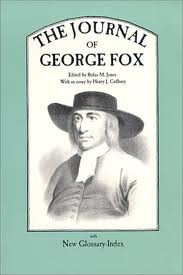 The Journal of George Fox
Edited by Rufus M. Jones

[A couple of days ago I hitchhiked from West Yellowstone, Montana to Driggs, Idaho. I got dropped off at this bookstore in Driggs, so I walked inside to take a look around. I noticed The Journal of George Fox and read a couple of pages from Chapter V--it was very inspiring. Below is an excerpt from Chapter V.]

"Being again at liberty, I went on, as before, in the work of the Lord, passing through the country into Leicestershire, having meetings as I went; and the Lord's Spirit and power accompanied me.

"As I was walking with several Friends, I lifted up my head and saw three steeple-house spires, and they struck at my life. I asked them what place that was. They said, 'Lichfield.' [Staffordshire, England] Immediately the Word of the Lord came to me that I must go thither. Being come to the house we were going to, I wished the Friends to walk into the house, saying nothing to them of whither I was to go. As soon as they were gone I stepped away, and went by my eye over hedge and ditch till I came within a mile of Lichfield, where, in a great field, shepherds were keeping their sheep.

"As I went thus crying through the streets, there seemed to me to be a channel of blood running down the streets, and the market-place appeared like a pool of blood.

"When I had declared what was upon me, and felt myself clear, I went out of the town in peace, and, returning to the shepherds, I gave them some money, and took my shoes of them again. But the fire of the Lord was so in my feet, and all over me, that I did not matter to put on my shoes again, and was at a stand whether I should or no, till I felt freedom from the Lord so to do; then, after I had washed my feet, I put on my shoes again.

"After this a deep consideration came upon me, for what reason I should be sent to cry against that city, and call it the bloody city! For, though the Parliament had had the minster one while, and the King another, and much blood had been shed in the town during the wars between them, yet that was no more than had befallen many other places. But afterwards I came to understand, that in the Emperor Diocletian's time a thousand Christians were martyred in Lichfield.

"Passing on, I was moved of the Lord to go to Beverley steeple-house, which was then a place of high profession; and being very wet with rain, I went first to an inn. As soon as I came to the door, a young woman of the house came to the door, and said, 'What, is it you? come in,' as if she had known me before; for the Lord's power bowed their hearts. So I refreshed myself and went to bed; and in the morning, my clothes being still wet, I got ready, and having paid for what I had had in the inn, I went up to the steeple-house, where was a man preaching. When he had done, I was moved to speak to him, and to the people, in the mighty power of God, and to turn them to their teacher, Christ Jesus. The power of the Lord was so strong, that it struck a mighty dread amongst the people. The mayor came and spoke a few words to me; but none of them had any power to meddle with me.

"So I passed away out of the town, and in the afternoon went to another steeple-house about two miles off. When the priest had done, I was moved to speak to him, and to the people very largely, showing them the way of life and truth, and the ground of election and reprobation. The priest said he was but a child, and could not dispute with me. I told him I did not come to dispute, but to hold forth the Word of life and truth unto them, that they might all know the one Seed, to which the promise of God was given, both in the male and in the female. Here the people were very loving, and would have had me come again on a week-day, and preach among them; but I directed them to their teacher, Christ Jesus, and so passed away."

The Journal of George Fox
Posted by Tim Shey at 10:21 AM