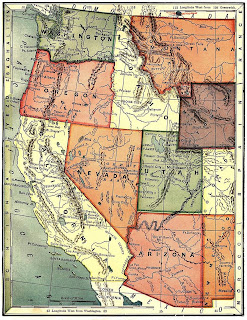 A little over a week ago, I was walking south of Rock Springs, Wyoming on U.S. 191 when this vehicle pulled over. This guy was Pastor Rich Carlson and we had some pretty intense fellowship for the fourteen miles of a ride he gave me. Pastor Carlson prayed for me and gave me a little money for the road.

I walked for three or four miles and this truck driver picked me up. I got in the cab of the tractor-trailer and he looked at me and said something like, “Aren’t you done hitchhiking all over the place and spreading the Word?” I recognized him right away; he had picked me up over a year ago on the same stretch of road. He later told me that he was a pagan. We didn’t talk about much. Later, just before he dropped me off, we talked a little about Dostoyevsky, and things Russian; he told me how to properly pronounce “Dostoyevsky” and “Karamazov”—at least, how the Russians pronounce it.

I then hitchhiked from Vernal and made it to Helper, Utah where I stayed at a shelter for three nights. From Helper, I made it to Mexican Hat, Utah where I slept in a junked pickup camper for the night. The next day, I got good rides through Kayenta and Tuba City to Flagstaff, Arizona where a guy named Tim picked me up.

He was driving one of those big motor homes from Iowa to southern California. Tim said that the motor home he was driving was worth $270,000.00. He told me that he was in a car crash up in Iowa that involved the car he was riding in and two tractor-trailers. He said that this tractor-trailer ahead of him on the interstate had jack-knifed and the guy driving their car lost control and the car began spinning around and this tractor-trailer came up from behind them and it looked like they were going to be crushed. If I remember right, Tim said that this powerful force threw their car into the ditch. Tim said that his mind still had not accepted the fact that he was still alive. He thought for sure that they were going to be crushed to death by the two tractor-trailers. I told him that the Lord preserved him in that crash because He had plans for him. We stopped to eat near Kingman, Arizona. Tim dropped me off just outside of Barstow, California where I slept in my tent just off Highway 58.
Posted by Tim Shey at 2:48 PM