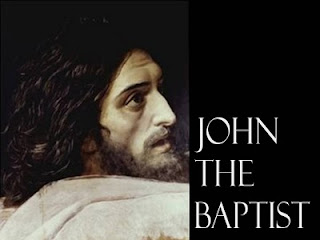 Mark 1: 6: "And John was clothed with camel's hair, and with a girdle of a skin about his loins; and he did eat locusts and wild honey."

John the Baptist's life was/is a powerful sermon. His life was separate from the world. There is a reason why he was clothed in camel's hair and ate locusts and wild honey.

The Pharisees loved to wear long robes and to be treated like royalty. They probably lived in fine houses and probably had servants at their disposal. But the Pharisees were white-washed walls and dead men's bones. They had an external show of religion, but had no internal or spiritual life.

John the Baptist had very few possessions--and by the looks of things--did not eat very well, but he was full of the Holy Ghost. He was the first one to say, "Behold, the Lamb of God who takes away the sin of the world."

When other people first saw Jesus, they would say, "He is a good teacher" or "He gives us loaves and fishes" or "He is a man of miracles and heals the sick and the lame." These were all true--Jesus did do these things--but they were secondary to the true purpose of Jesus: to die on the Cross for the sin of the world. It is the shed Blood of Jesus that cleanses us from sin.

Because John the Baptist was separate from the world, and did not indulge in a fake religious lifestyle, he could see clearly (sin causes spiritual blindness) what the Lord's will was for Jesus' life. His eating of locusts and wild honey was a powerful testimony against the satanic phariseeism of the day. I would rather eat locusts and wild honey, camp out on the other side of the Jordan River and live in the Presence of God, than eat well, live fashionably and rub shoulders with the Pharisees.

I believe that Jesus had an idea of who He was and what He was supposed to do before he met John the Baptist, but when He finally met John at the Jordan River, it was confirmation when he heard John's words. Now Jesus knew for a fact that he would eventually die on the Cross because He was the Lamb of God (the sacrificial offering from God for the world). "In the mouth of two or three witnesses let every word be established."

At least I have never had to eat locusts and wild honey.

What should we learn from the life of John the Baptist?
Wearing a Rough Garment
Posted by Tim Shey at 8:43 AM