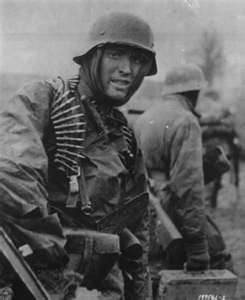 Last night I had a dream where I was a soldier in the U.S. Army in World War II. I was carrying a Thompson submachine gun and I was wearing a soldier’s uniform. The U.S. Army had just liberated this city from the Nazis and I was walking in this courtyard. There was this fifteen-year-old boy who was acting very strange: it seemed like he was trying to draw my attention away from a certain part of the courtyard. I knew he was trying to hide a German soldier. I told the kid to get out of the way. Then I noticed this German soldier hiding between a bush and a wall. He had a machine gun in his hand. I pointed my Tommy gun at the German soldier and shot him full of lead; he fell out of the bush dead.

I then turned to the fifteen-year-old kid in anger and asked him, “Do you know Jesus? Do you know Jesus? Do you want to burn in hell when you die?” I was really angry at the kid for trying to hide the German soldier. I then put my hand on his shoulder and began praying in tongues. I wept violently for a few minutes and then the dream ended.
Posted by Tim Shey at 9:29 AM