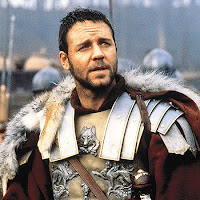 Last night I had a fairly long dream about Russell Crowe, the actor (Gladiator, Master and Commander, A Beautiful Mind). I was in some city and I went to a theater and saw a film starring Russell Crowe. After the film, somehow I met Russell Crowe outside the theater and we walked to his apartment.

On the way to his apartment, we saw this old woman with white hair—she was very beautiful. We both recognized her: she was a famous opera singer or actress in her younger days. Now she seemed like she was destitute and in poverty—she was begging on the street corner.

Russell and I began to talk with her and the three of us walked to Russell’s apartment. There Russell gave her some food to eat and some money. Russell and I talked for quite some time at his apartment.

The last scene: Russell Crowe was on a street corner preaching the Gospel. He was saying things like, “Repent of your sin and ask Jesus Christ into your life.” There was a lot more to the dream, but the details are gone from me now.
Posted by Tim Shey at 9:21 AM