A Revolutionary People at War 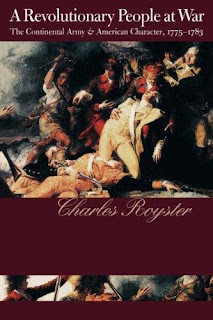 A Revolutionary People at War: The Continental Army and American Character
By Charles Royster

Page 5: "Many revolutionaries believed that God had chosen to preserve and to exemplify self-government for the world. The revolutionary generation had to fulfill God's purpose against the attacks of men who, they thought, knowingly strove to sap or smash self-government everywhere. History was full of tyrants who ruled because they alone were strong or because the people had decided to share the rulers' corruption by selling themselves into slavery. Seen in this light, the British attack was no surprise, just as 's freedom was no accident. Britain sought to subjugate America partly out of envy of America's strength, prosperity, and liberty. Britain and America were like Cain and Abel, but Americans would defend themselves. Having been chosen by God to show how self-government enabled a people to flourish--and holding this promise in trust for the world--what could Americans expect but assault? In the New Jersey Journal, 'A Soldier' said, 'We ought to rejoice that the ALMIGHTY Governor of the Universe hath given us a station so honourable, and planted us the guardians of liberty, while the greatest part of mankind rise and fall undistinguished as bubbles on the common stream.'"